Letter from Belize no. 76

In ancient Maya tradition sunrise on the 31st October marks the start of the celebration of Nahal Pixan (Pronounced Pee Shun) which translates as “Food for the Souls” and continues until 2nd November. On Saturday evening the Corozal House of Culture put on their annual event to mark this important occasion.

Apparently centuries ago in the Mayan community cemeteries did not exist. The Maya buried their dead in their own backyards “close to their heart and home”. The deceased was placed in a hole in the ground and in his or her mouth was placed a certain amount of well-cooked corn named “keyem”. It was left there so that the soul could feed while in eternal resting. Loved ones who are deceased are not thought to be gone definitely. Tradition says their souls are still present and the deceased faithfully visit each year to be honoured by their families and friends.

The tradition includes various rites, the main one being the creation of an altar on which seasonal fruits and food are placed along with pictures of the deceased. On the eve of the celebration in the centre above the altar a green wooden cross is placed representing the Ceiba tree which in Maya tradition symbolizes the universe and its division into tree levels, Man, Earth and Cosmos.

Here is the main altar being tended to by Adam who attends our satsangs. He had come to the Retreat earlier in the day to collect some wood from the forest to build the altar.

The other altars were made by the Corozal House of Culture, the Corozal Community College and some private families. As you can see they show the influences of not only Mayan but also Catholic and Halloween traditions and this is where the Maya were very cunning. In order not to lose some of their ancient and deeply symbolic rituals when the Spanish arrived in the 16th Century and tried impose the Catholic faith onto the people, the Maya managed to hide some of their ancient rituals under the guise of the newly introduced rituals. In fact they are not necessarily mutually opposed. Nahal Pixan coincides with the Christian observance of All Saints Eve or All Hallows Eve or Halloween and All Saints Day on the 31st October and 1st November respectively. Even symbolic artifacts like candles, incense and the cross were used by the Maya long before the Christian influence. 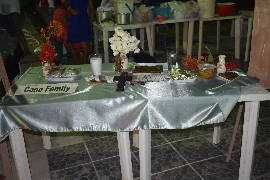 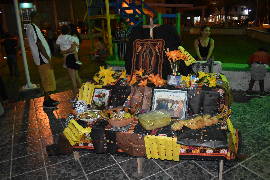 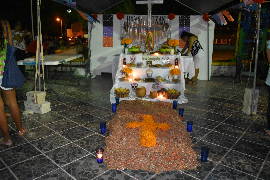 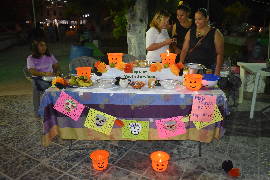 We were entertained by the wonderful Mestizo dance group, Raices Mexicanans-Retonos Belicenos, who performed 3 dances, 2 of them in celebration of corn. 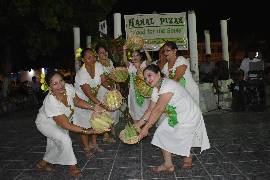 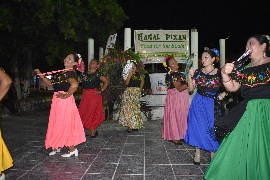 Earlier on there had been a traditional “pib”, pork cooked in a hole in the ground and served with tamales and there was a chocolate maker who served traditional cacao drink which is absolutely delicious, seasoned with spices like cinnamon and black pepper. 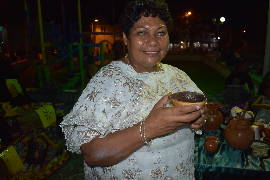 The highlight was the Pok ta Pok game performed in the street by the reigning Central American champions – our very own Belizean team from a small village outside Orange Walk. 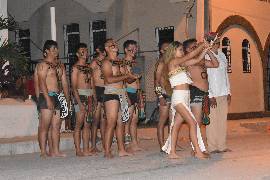 It began with a thanksgiving ceremony acknowledging the cardinal points – North, South, East, West, up and down

It really is an extraordinary game and mighty energetic. These guys must be so fit. They can only strike the ball with their hips and the side of their thighs. If they touch the ball with any other part of their body they lose 1, 2 or 3 points depending on which part of the body and those points are added to the score of the opposing team. 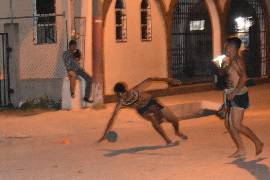 The focus is not great on this photo but you can see how the player puts his hand out to steady himself. He will then swing his hip towards the ball and sweep it low on the ground to the other side. They can also strike the ball from a standing position and aim it into a high arc. 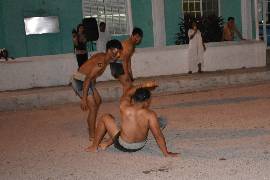 This guy has just hit the ball with his hip – you can see the ball just level with his arm. If he fails to make the ball move to the opposite side there is a high penalty for that. They were struggling with the poor lighting as the high street lights were blinding and the ball is black and was very difficult to see and estimate its speed and direction.

After the match they did some demonstrations. 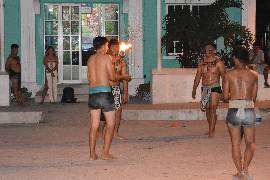 One was with a flaming ball which they scooped up off the ground and then threw double quick to each other. 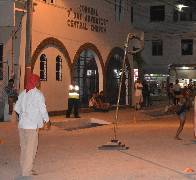 In this one the coach threw the ball and they had to hit it with their hips and aim it through the hoop. Here the ball is above player framed by the lower right hand window.

In ancient times the game was used as a way of solving disputes. There are differing stories about the captain of the winning team being beheaded afterwards or some say the losing team but none of that is substantiated.

Hot on the lips of all Belizeans at the moment is the forthcoming referendum to decide whether or not Belize should go to the International Courts of Justice to challenge Guatemala’s claim for access to the Caribbean off Belize. It is difficult to understand all the history but over the last 150 years it seems there have been treaties formed and broken between the British, the Spanish, the Maya, Guatemala, and Mexico. Guatemala was left with only a tiny bit of coast line between Belize and Honduras. They are already making inroads with illegal logging down in the south of Belize having stripped their own lands of trees. It is a very sensitive subject. The British Government has given a large sum to be used to educate the people. This should of course be impartial but there is a concern among the indigenous people (the Maya and Garifuna) that it is very biased and that a yes vote may in fact be detrimental to the country leaving the border undefended and possibly losing some land to Guatemala.

Ms Felicitas, the compare of the Pok ta Pok game suggested that the dispute would best be solved with a Guatemala vs Belize Pok ta Pok match. Not a bad idea.

So it was a lovely evening of entertainment and education too actually. I think the Maya were a very enlightened race with deep understanding of body, mind soul and their place in nature.

My love to all,
Rose

Printed from https://gatewayretreatbelize.org — Letter from Belize no. 76.