Letter from Belize no. 77

I have been once again musing over the marvellous phenomena that Nature is. What triggered it was watching how a parasite, that has a gorgeous orange flower and attracts all sorts of birds and in particular the humming birds, is in fact a killer. It is sad because when my camera was new it provided me with a wonderful training ground for photographing humming birds. 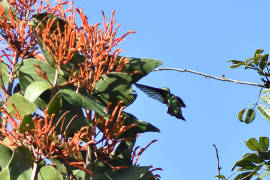 A few months after that photo was taken we noticed that the parasite had died suddenly and then we realized that not only that, the tree itself had very abruptly died. We had to chop 2 trees down and the third remains, mainly because it is too much of a challenge to fell and also because other birds do like it to perch on. 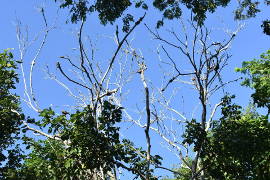 The top branches of the dead tree

This year we have noticed the parasite in several other trees and I find myself getting quite anxious on behalf of those trees, realizing that in a year’s time they too could have fallen to the same fate. The tree currently causing us great sadness is the Bob (a common name to all Belizeans but as yet with no formal Latin name). This tree stands right in front of the house and is home a remarkable number of birds’ nests every year. It featured strongly in the nesting photos I took earlier this year. It has a borer of some sort that all year has caused it to weep and ooze and now it has the dreaded parasite and is dropping leaves alarmingly. While having our tea this afternoon we saw no fewer than 8 species of birds stop off in the Bob. 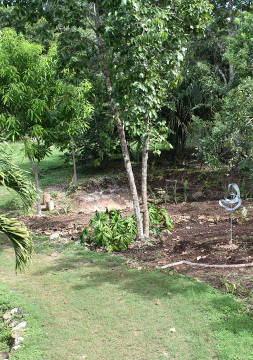 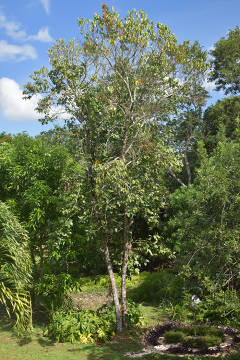 The left hand photo was taken almost 2 years ago. You can see the foliage was much lusher. You can just pick out the orange flowers of the parasite in the right hand photo.

I even started wondering, and fretting a bit, if we humans were making the situation worse by clearing some of the trees in creating the garden and so allowing a greater proportion to become susceptible to the parasite but then discussing it with Henry and looking more closely at nature - at the rhythm of things, at the natural cycles - I am seeing that the very dying is also natural. In fact, where man plays a negative role is when we get attached to things and try and go against the natural passage and rhythm and interfere by trying to preserve things that are naturally at the end of their lives. Add to that not only sentiment but greed and the desire to make as much money as possible and we have a world in which man manipulates the whole of nature instead of being a participating part of it, flowing with it, creating with it. Instead we have created deserts, hunger, disease and war. But I tell you if you want to get away from the sad and depressing news in the world, do yourself a favour and go and sit in nature for a moment and see that no matter how it looks, everything is in fact all Okay. In nature death is a natural part of life. In the forest there is constant spring cleaning going on, the old making way for the new, cycles within cycles. 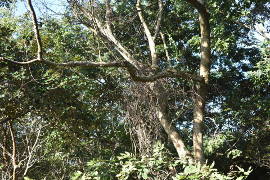 All this musing got me to thinking about the Hindu god forms and Goddess Kali who is perhaps the most misunderstood of all goddess forms. Kali is the consort of Shiva who, in the Hindu trilogy, is the destroying aspect of God in creation, Brahma being the Creator and Vishnu the Preserver. Kali is also the female aspect of Kala meaning Time, another aspect attributed to Shiva. So she is the female form of time or you might say “the fullness of time” and that incorporates time as the changing aspect of nature that brings things to life or death.

So I am learning not to be attached to our trees – look at that “our” trees. They are only “ours” in as much as right now, for the moment, we can and do enjoy them. And if and when they die we can enjoy that too as that is their natural journey and they will provide food for insects, organic matter for soil, perches for any number of different species of birds.

Whew all that got a bit heavy but that is one of the things I really appreciate about living here. Nature is in our faces, it is right there to learn from and emulate. A gift.

Back in the other world I have, as of the beginning of this month, been here for 7 years!! Where did time go? I have also just completed teaching a 6 week drawing course in conjunction with the Corozal House of Culture and thoroughly enjoyed it. And the very talented young student who I have been mentoring over the last 18 moths has been accepted into an art college in Canada. So now we look towards Christmas, a quiet one this year, and then a whole new year ahead. The cycle of weeks within the cycle of within the cycle of lives.

Our love to all,
Rose

Printed from https://gatewayretreatbelize.org — Letter from Belize no. 77.