Letter from Belize no. 79

Last Monday we hosted the February meeting of the Roots and Shoots garden club. It went very well with 22 participants apart from us. Only trouble was I had so much on my mind I completely forgot to take any photos. However I thought it would be nice to share with you the gist of the meeting.

The purpose of it was to showcase the tree trail which we have developed over the last couple of years and this was the first official group to walk the walk – or is it trail the trail? As it is quite difficult trailing a group of over 20 people around a trail, all having to gaze way up into the sky to see the tops of the trees and hopefully catch a glimpse of the leaves while not dislocating their necks, we decided to discuss a small selection of the trees particularly in relation to our old favourite hobby horse – that of Living In Harmony With Nature. After that the guests were free to wander the trail or the forest, either on their own or with a guide, namely Charlie and Christina who had both been helpers with the project.

I pointed out how we have found that if you just quietly observe nature, and here at the Retreat we have it all around us, you can learn so much. Every plant and every creature does just as it is meant to do. None of them fight for attention or push themselves forward to be special or the best. A tree grows, produces fruit and seeds for its own continuation and at the same time provides shelter, food and oxygen for whoever will benefit without prejudice or favouritism. There is no rush, no hurry. Everything happens in its own good time. Nature is ever patient, it does not try to improve things, speed things up or change the way of things.

And I told the story of the parasite that kills trees. That sometimes things that look to us like something going wrong, like an untimely death of a plant or tree, we have learned is all part of the plan, no mistakes. For example 2 years ago we were really enjoying that parasite that has bright orange flowers. It not only looked pretty but attracted many birds, particularly the humming birds. 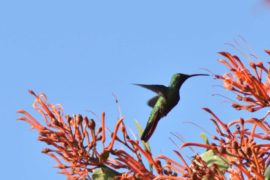 Then quite suddenly the parasite itself died and with it at least 4 trees out at the back. This year as soon as I saw the orange flower in several trees and in particular the Bob tree out in the front of the house that is the nesting ground to at least 6 species of bird every year, I began to feel very concerned for the trees and then it suddenly struck me. This is nature’s way. The parasite is also doing its job and if that means killing trees off then so be it. It is we who try and prevent death or change the course of things, improve on things, create more and better - and look at the mess we have made in the world.

Then I told them how the Tree Trail came about. How almost 3 years ago now while taking my daily walks in the forest I began to think how great it would be to identify some of the trees. I had a grand plan to carve a pathway through the entire 30 acres with trees labeled all the way. So I took my friend Christina and Ernesto, who was working for us at the time, and we started first of all in the cleared part of the forest where the Maya mounds are marking as many trees as any of us could recognise. Then we headed deeper into the forest, further than I had ever been before but as the vegetation got thicker and thicker and we were really having to bushwhack our way through Ernesto suddenly said in a remarkably calm voice, “Biiiig rattle snake Ms Rose”. It was huge indeed and I think at that point I decided - You know what, I think we will just stick with the cleared area. But that soon became completely overwhelming, so many species of tree are there. And then I thought - You know what. I think we have loads of trees right here around the house, why don’t we concentrate on them. And that is what we did. We have identified 24 different species and had huge help from Shipstern Conservation and Management Area. We were very fortunate that at the time we asked for help they had a visiting botanist from Switzerland (well he is actually from Costa Rica but lives in Switzerland) and he was able to confirm or correct our identification.

At the meeting we then did a sort of “show and tell” demonstrating a few examples of exactly how trees live harmoniously.

There is a book we have called the Hidden Life of Trees and it describes how trees communicate with each other. For example, where you see roots overlapping they send messages about food, about danger. There is this whole world of conversation going on out there that we are completely unaware of.

The first of our pair of trees that help each other is the Gumbolimbo and the Poisonwood. They are the Belize equivalent of the British Stinging nettle and Dock leaf. The Gumbolimbo is the antidote to the vicious effects of the Poisonwood sap and they are usually found growing in close proximity to each other. 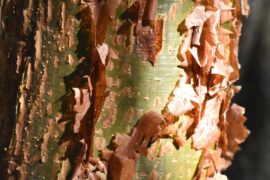 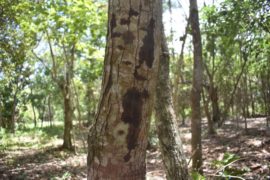 Strips of Gumbolimbo bark boiled in water and sponged on to the affected area several times a day or the bark sap rubbed directly on to the affected area really do soothe the sore and very itchy little blisters. Some people are very susceptible to the Poisonwood and it can spread over their bodies. Others may have a very slight reaction.

A wonderful example of the symbiosis between tree and insect is the Bullhorn which has developed a special relationship with a species of tiny ants. The ants live in the hollow spines or thorns. You can see a tiny round entrance hole beneath the tip of each pair of thorns. So the trees provide a safe place to live as well as producing detachable leaflet tops which ooze little yellowish globs which are high in protein for the ants to feed on. 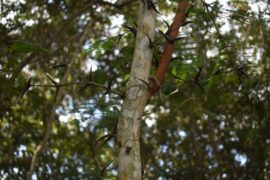 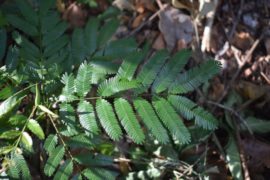 Thorns and leaves of the Bullhorn

For their part the ants are very aggressive. They secrete formic acid which gives a very nasty sting and prevent any vines, fungi or other plants from growing on the trees. And any other insects are forcefully fought off – a combination of sharp thorns and a powerful sting.

Of course so many trees give food and shelter to birds. I chose just 2. Grande Betty which is also useful to people (its leaves used for sprains and bruises and its bark for ‘bad belly’ and diarrhea) has prolific fruit and is very popular with birds. Last year we saw as many as 7 species of bird at any one time in the tree. 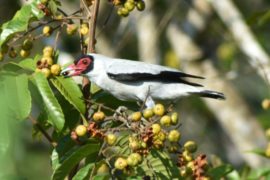 Madre Cacao, which is flowering now, was used by the Maya in agro-forestry planting trees among the cacao. They are also used for live fencing which is how we have used them. They have very pretty flowers which the birds absolutely love and they attract, among many others, the parakeets who are great fun to watch plucking the flowers. 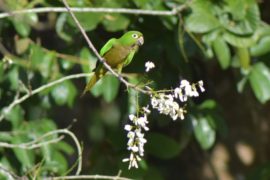 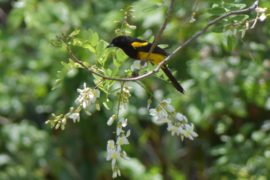 Parakeet and Black-cowled Oriole in the Madre Cacao

The birds of course help to distribute seeds and, as the flowers and fruit also attract a lot of insects, the birds keep the tree insect free by gobbling them up too.

Trees of course provide man with loads of things – wood for fires, building materials, fruits, medicines but I fear man does little in return for the trees.

The Mahogany is the national tree of Belize. They can reach 45 metres tall and 2 metres in diameter. In the mid 1700s the Spanish walnut was losing popularity as a wood for making furniture and British carpenter Thomas Chippendale began to use Mahogany for all its beautiful qualities, designing and crafting furniture for the nobility in Europe and it soon became the rage. By this time the logwood, used for its purple dye for Royal and Clerical robes, was running short and the exploitation of Mahogany in Belize really began. By the end of the 18th Century the largest trees had been cut down and today it is listed as an endangered species. The only place I have seen full grown Mahogany is in La Milpa up on the western border with Guatemala. I have to say, I feel less enthusiastic about antique mahogany furniture these days.

Mahogany planted by Henry in 2010

The Dogwood or Habim also known as Mayflower has remarkably hard timber which has been used for making the keels and boughs of boats. The ancient Maya used the flowering of the trees as a signal to start planting their crops. As the Latin name (Piscidia piscipula) suggests this tree has something fishy about it (as in Pisces) and it was called Fish Fuddle. The bark and twigs were pounded and put into the water. It would act as a sedative to fish, make them drowsy and bring them to the surface so they could easily be caught. (Mean trick I think). It can also be made into a drink by mixing it with honey and fermented. 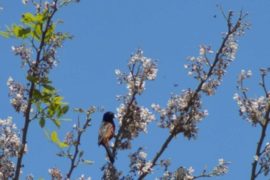 Orchard Oriole in a flowering Habim

And that was basically it. People really enjoyed it all and loved the gardens and the Maya site.

Next day one of the women attending the meeting sent me an excerpt from Herman Hesse’s book Wandering: Notes and Sketches which she had just received that day. He absolutely hits the nail on the head. Here are a couple of his observations if you will indulge me:

For me, trees have always been the most penetrating preachers. I revere them when they live in tribes and families, in forests and groves. And even more I revere them when they stand alone. They are like lonely persons. Not like hermits who have stolen away out of some weakness, but like great, solitary men, like Beethoven and Nietzsche. In their highest boughs the world rustles, their roots rest in infinity; but they do not lose themselves there, they struggle with all the force of their lives for one thing only: to fulfill themselves according to their own laws, to build up their own form, to represent themselves. Nothing is holier, nothing is more exemplary than a beautiful, strong tree.

A tree says: My strength is trust. I know nothing about my fathers, I know nothing about the thousand children that every year spring out of me. I live out the secret of my seed to the very end, and I care for nothing else. I trust that God is in me. I trust that my labor is holy. Out of this trust I live. When we are stricken and cannot bear our lives any longer, then a tree has something to say to us: Be still! Be still! Look at me! Life is not easy, life is not difficult. Those are childish thoughts. Home is neither here nor there. Home is within you, or home is nowhere at all.

And that really is Living In Harmony With Nature. There is more but I won’t go on ….. and on and on. But, if you would like the rest of Herman Hesse’s article let me know and I will send it on to you.

Our love to all,
Rose

Printed from https://gatewayretreatbelize.org — Letter from Belize no. 79.