Letter from Belize no. 87

I know, I know I just wrote letter no. 86 but there have been so many birds I have been able to photograph this last month I just have to share them with you.

Lockdown only applies to the human race, for everything else it is business as normal. And normal at this time of year is, of course, all about continuation of the species. The drive to reproduce is phenomenal. If there is a setback, like nests get dismantled by another species intent on recycling building materials, or eggs or fledglings get snatched by predators, or parasitic birds like cuckoos or the cow bird toss eggs or babies out of a nest of a different species and lay their own eggs for their babies to be reared by unsuspecting foster parents, these plucky little creatures look puzzled for a short while and then pick themselves up and just go right ahead with the business of reproduction.

And then there are the migratory birds. They have my deepest respect and awe and admiration. Tiny little things that are driven to fly each year from their breeding grounds in North America to their winter resorts in Central or South America, passing through Belize on their journey.

These pictures are all taken at Gateway Retreat from our veranda in the last month.

First there are the local residents, those who are with us all year round. 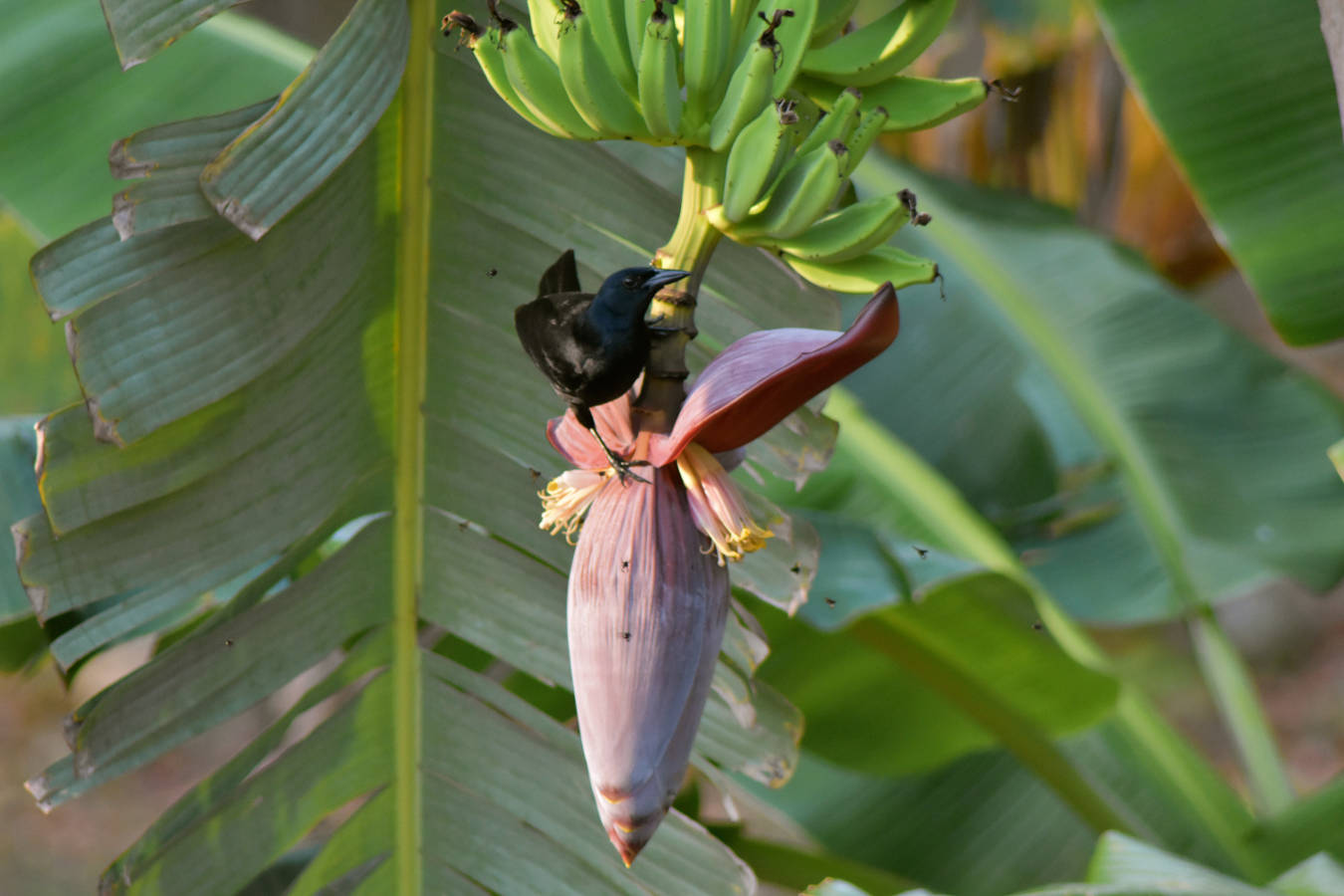 The Melodious Blackbird is a very common bird in our garden, here seen enjoying insects on the banana flower. The last few years they have nested in the mango tree directly opposite our front veranda where we have tea every afternoon. Last week I heard the pair crying out in a very anxious tone and went creeping out with my camera thinking it was a snake but suddenly out of the tree flew a hawk too fast for me to capture on camera and I don’t know if it got any eggs or babies. The nest though is looking very battered. 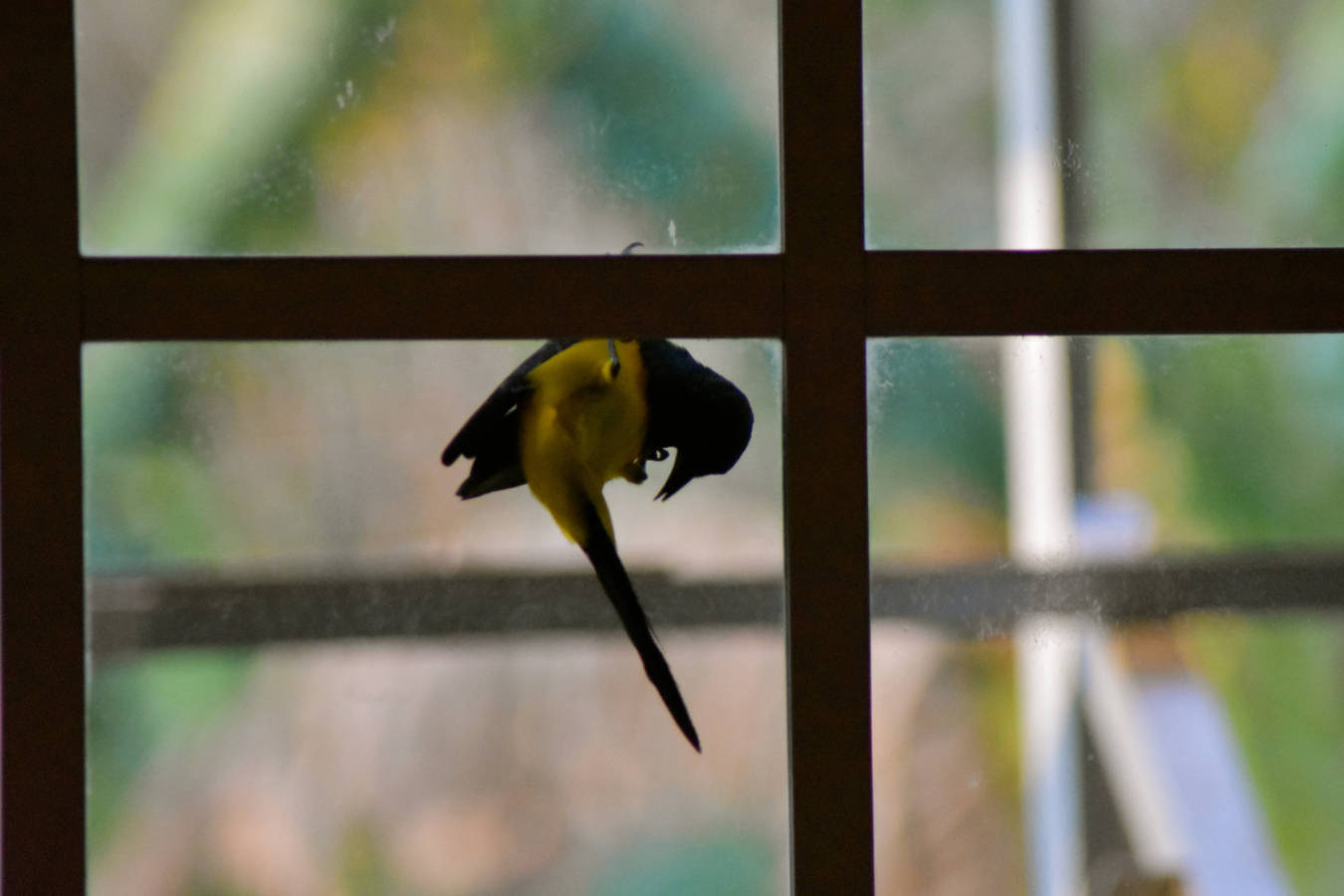 This is the male Black-cowled Oriole which loves attacking its image. Every morning and evening it hangs on the door having a jolly good go at itself, whether in narcissistic admiration or as a warning to potential competition we are never sure. 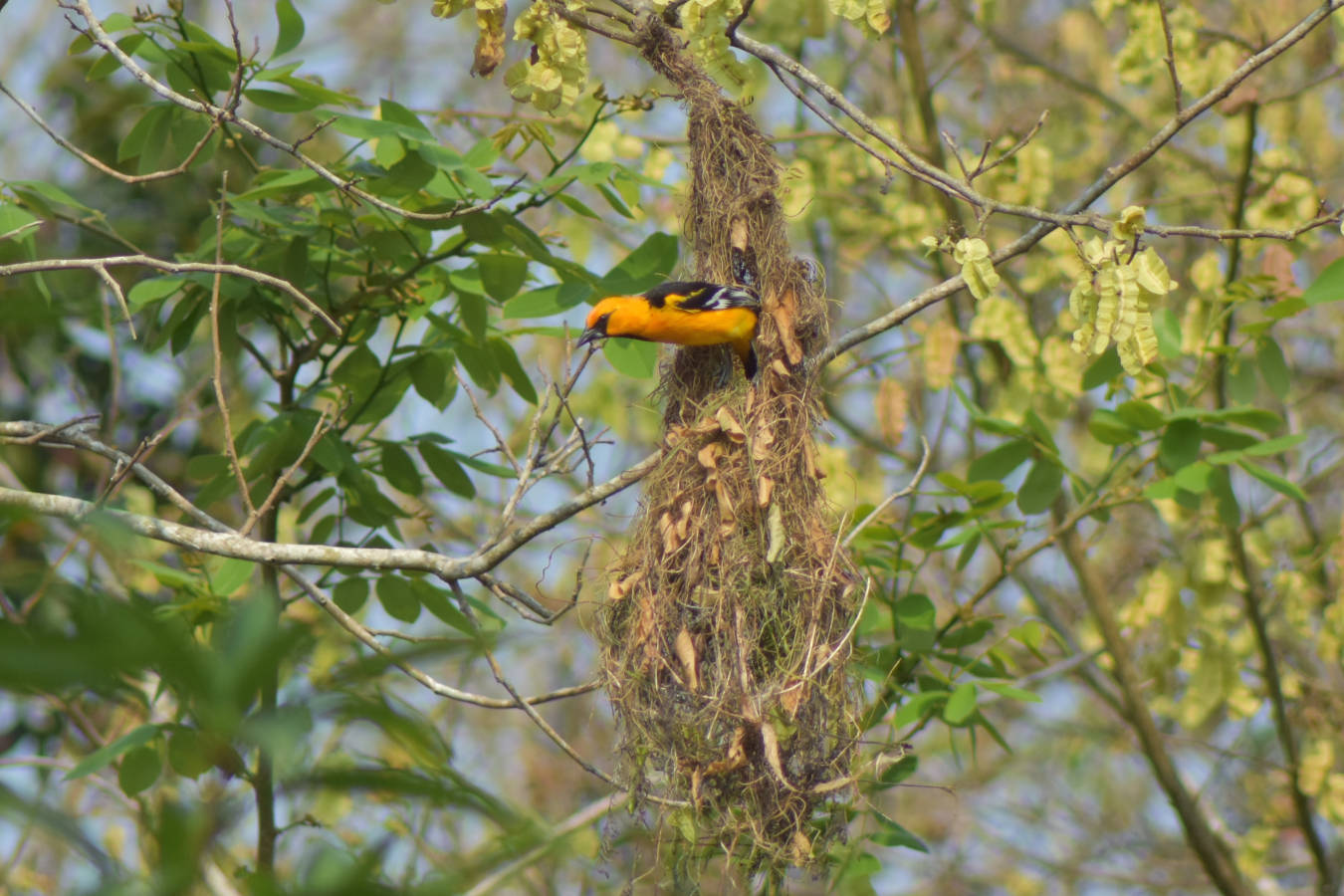 Another all year round resident is the Altimira Oriole who builds its nest in the same tree every year. I don’t know if it builds several nests and then chooses the best because sometimes it may go off for quite a few days and then suddenly come back and pick up building where it left off. 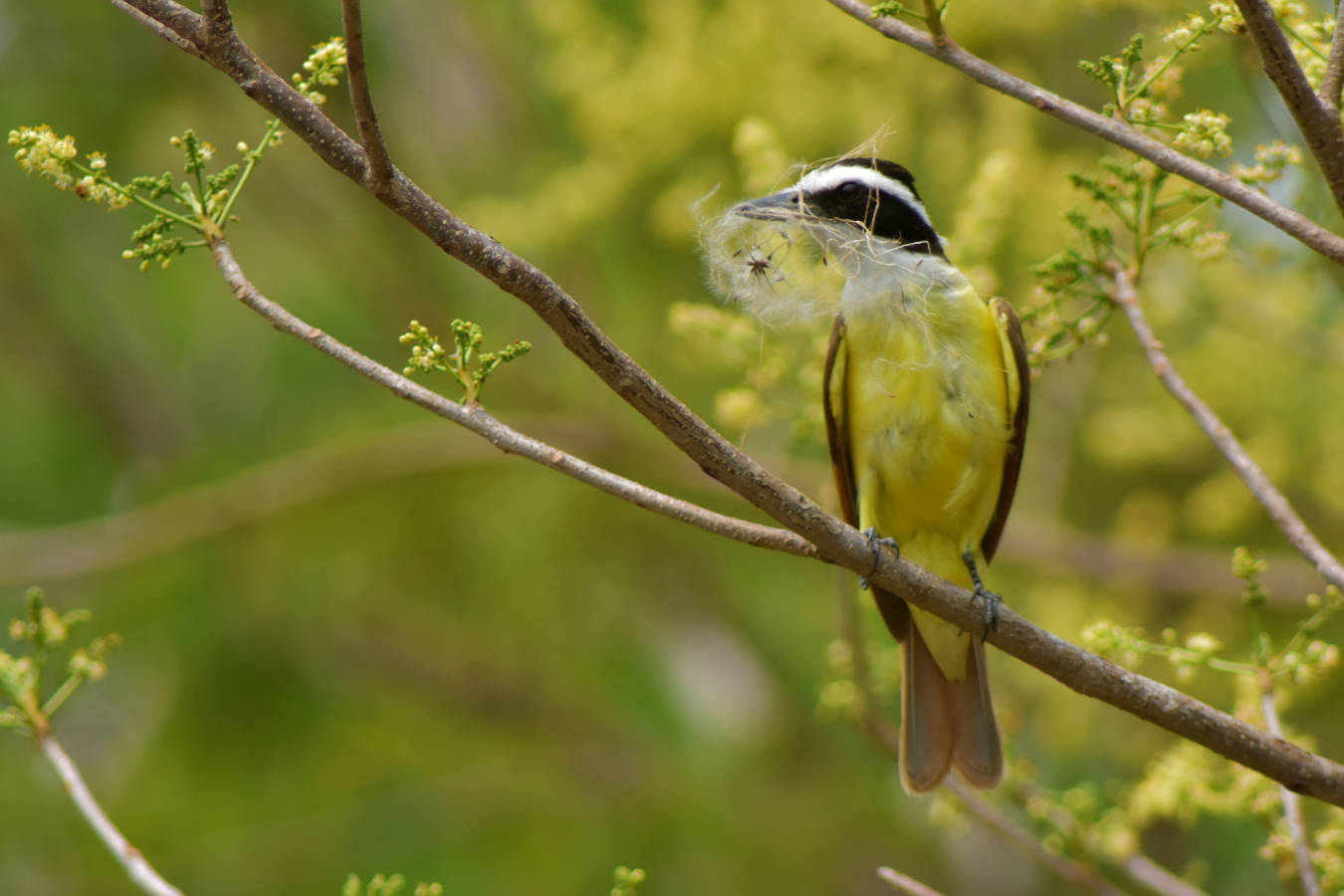 Very evident all year is the Kiskadee, here with a soft fluffy seed in it mouth which it uses for lining its nest. 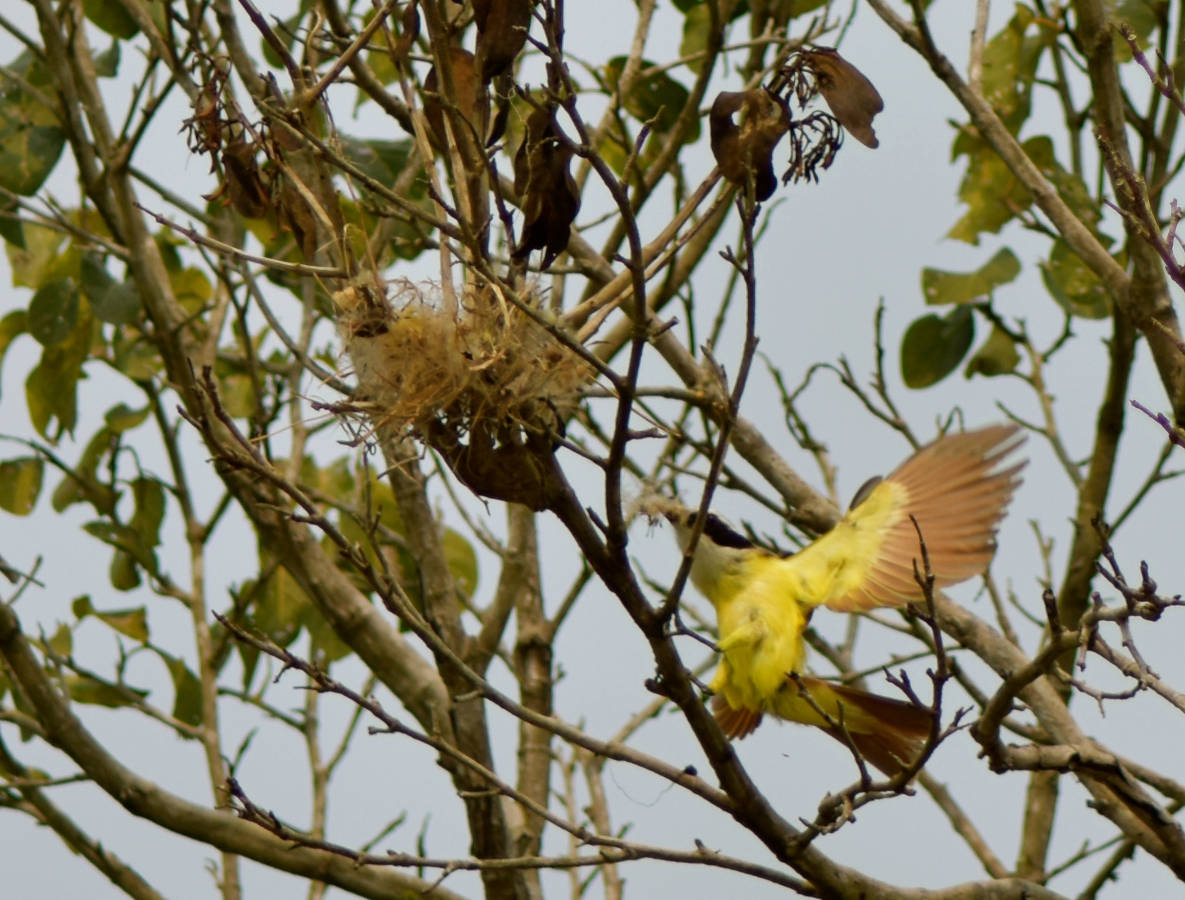 A couple of weeks ago this Kiskadee snatched building materials out of the nest being built by a pair of Social Flycatchers. 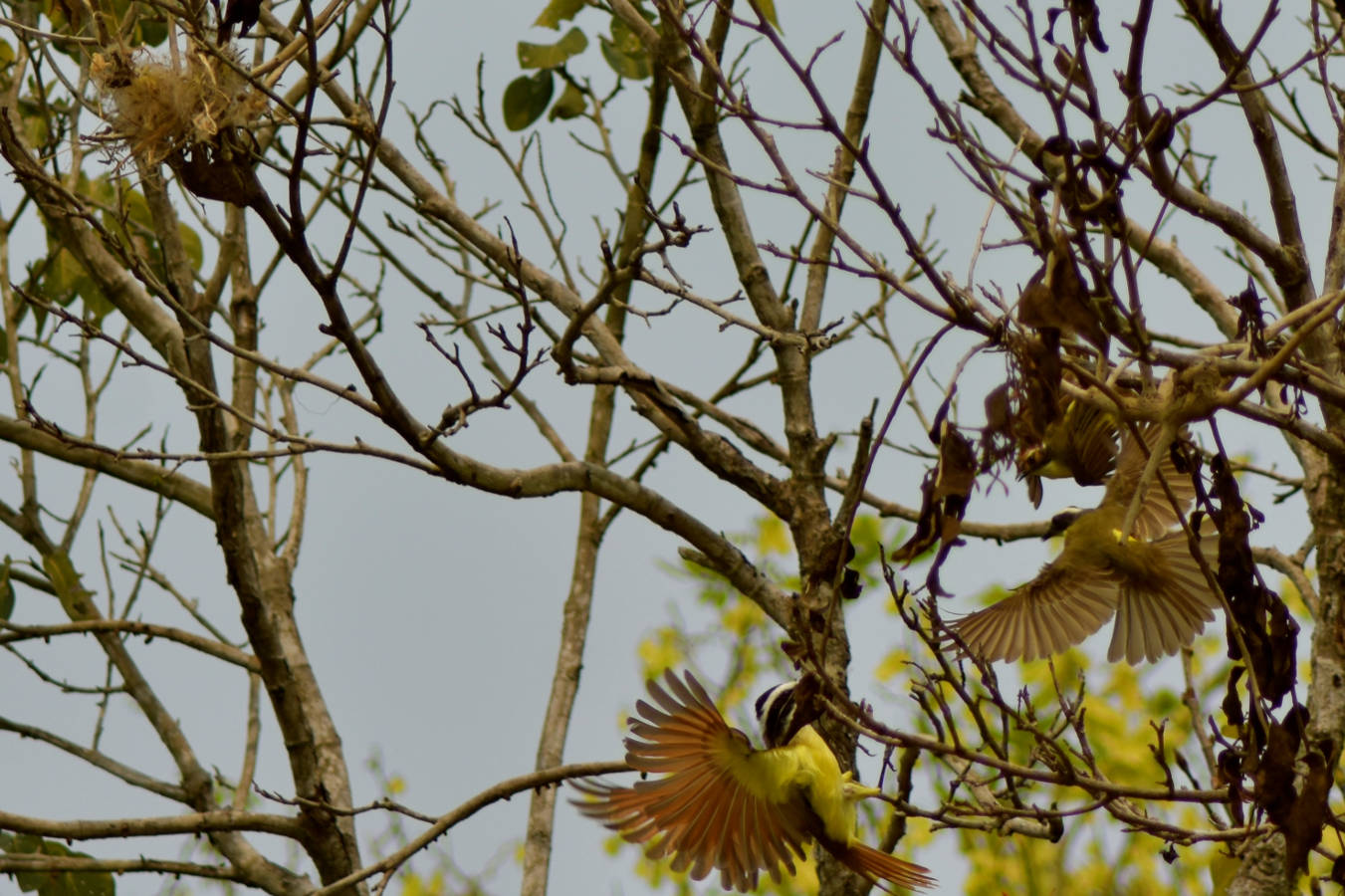 The flycatchers, can be very aggressive and territorial during nesting time and they repeatedly attacked the Kiskadee but the Kiskadee was not about to be intimidated and by the end of the day it had demolished their nest. The flycatchers moved into the neighbouring mango tree and promptly built a new nest.

Then there are those who are residents in Belize but who we only see during the breeding season. 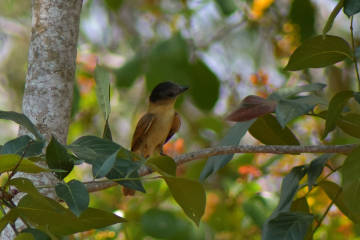 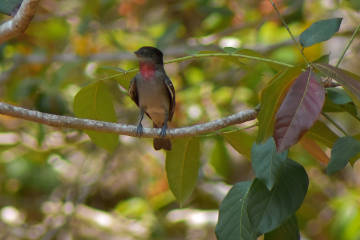 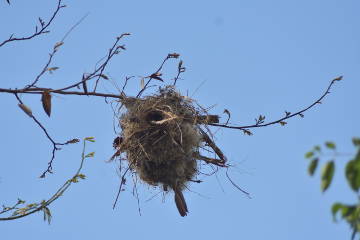 Among my favourites are the Rose-throated Becards, female on the left, male on the right. They are small delicate birds who build a great big very substantial nest.

Note: After writing this I found the nest lying on the ground below the tree. I wonder what happened there. 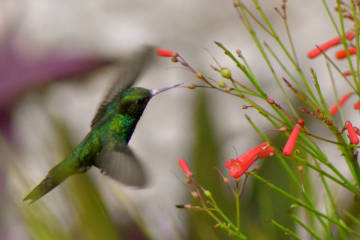 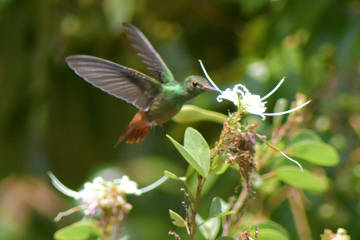 These 2 Humming birds live in Belize all year round, not necessarily at the Retreat. They are tiny, hardly bigger than a hawk-moth and are really difficult to photograph as they flit from flower to flower at the speed of light – well that’s an exaggeration but it seems like that when you are trying to focus the camera 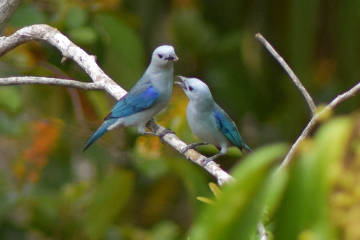 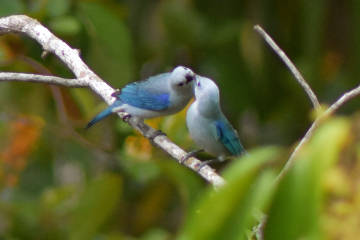 My bird book says this Blue-grey Tanager, a resident in Belize, is increasingly less common in the north so we are very lucky to see it every year at this time. They are nesting in a palm tree in front of the house and I know they don’t have babies yet so I am guessing this is a courting practice that is going on – wooing her with a nice intimate dinner. Or is she wooing him? 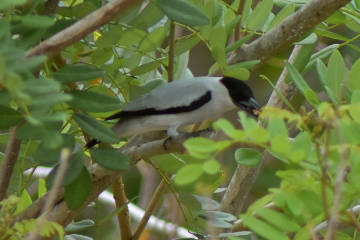 A first for us this year was this pair of Black-crowned Tityra’s, the male on the left. More common is their family member the Masked Tityra which we also see around at this time.

Then we move on to the transients, those plucky little fellows who travel miles to nest and breed. I feel so privileged that they choose this tiny 30 acres to build themselves up before the northward journey. 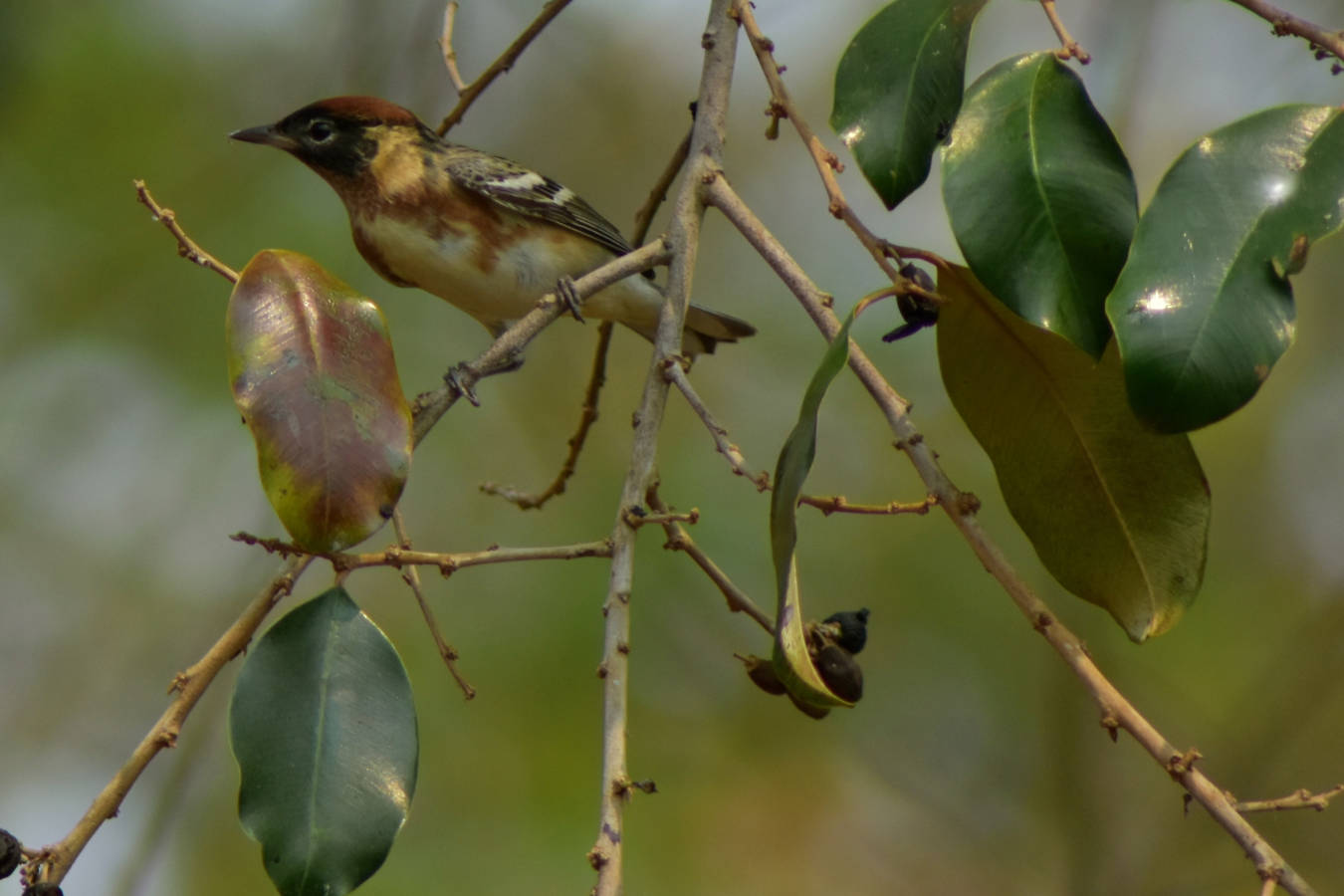 Another first for us this year was the Bay-breasted Warbler. A mere 5 inches from head to tail, it nests east of the Rocky mountains from central Canada to the Great Lakes and it winters in Venezuela and Colombia. Just imagine. 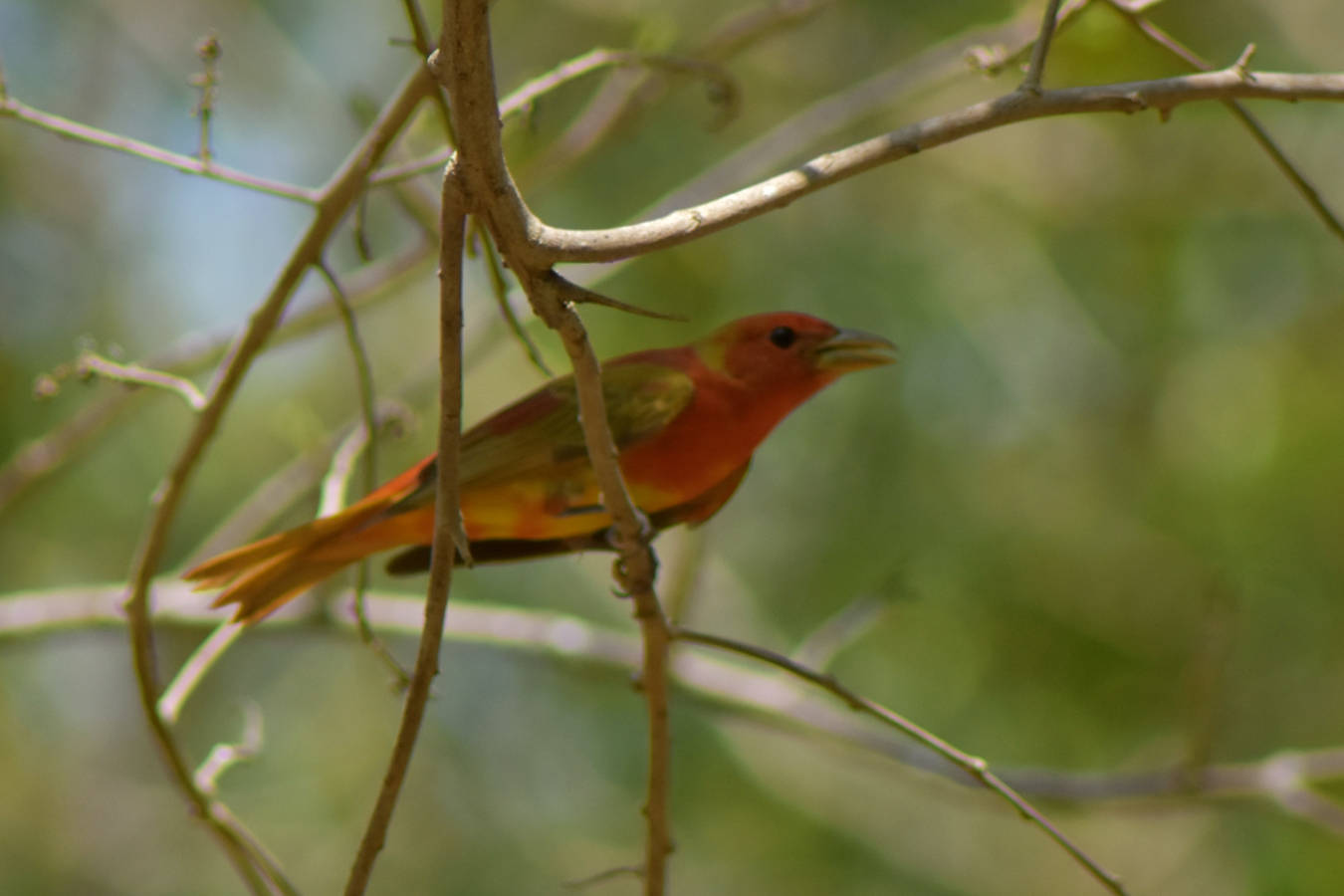 It was a real stroke of luck to see this young male Summer Tanager. Here it is molting out of its immature, female yellow colouring into its adult red colouring. It does not travel as far as the previous species, wintering between central Mexico to the north eastern parts of South America and nesting between central and south western USA into Mexico. 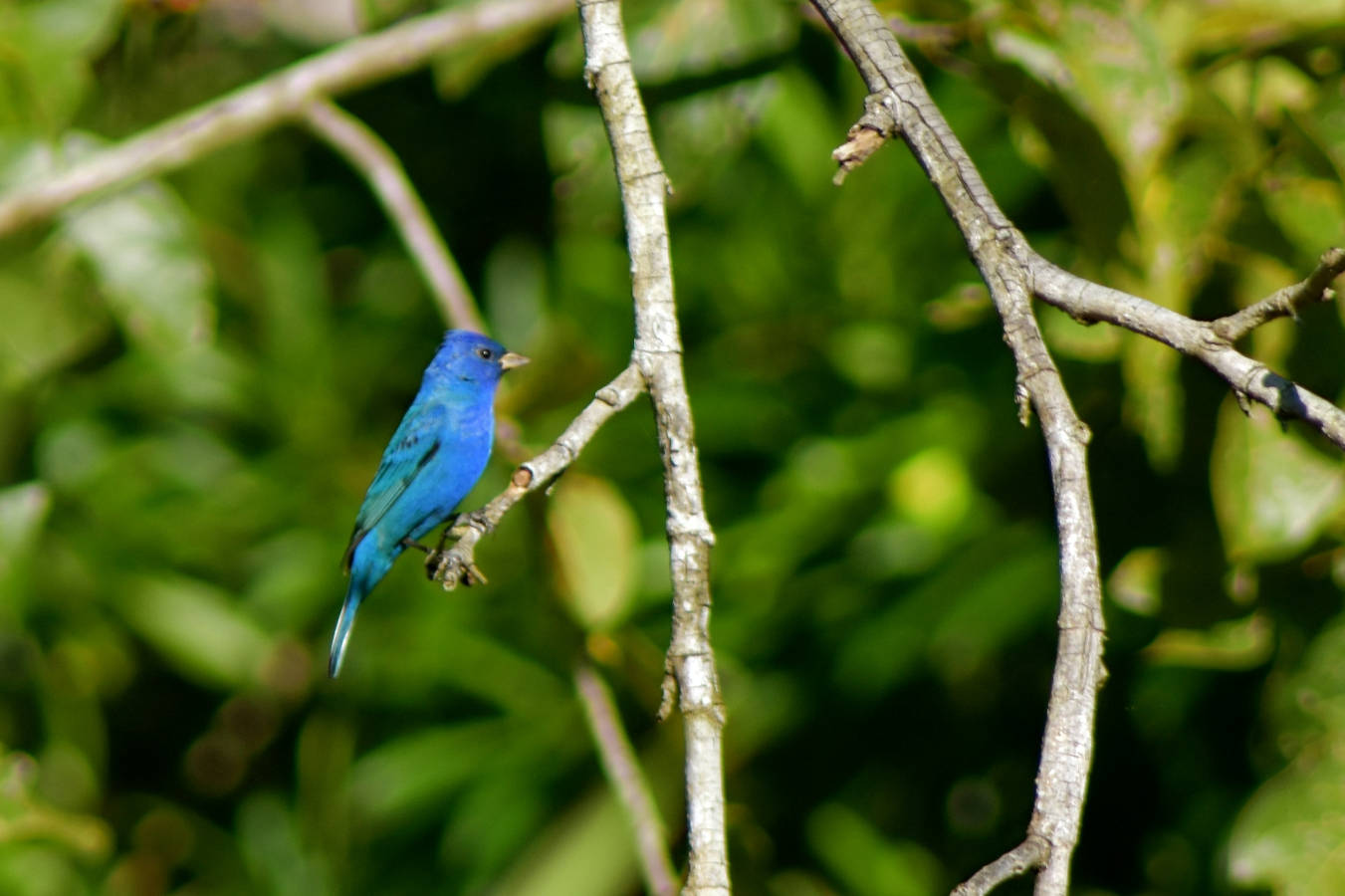 Another tiny one, the Indigo Bunting moves northwards to nest in a wide area between south of Canada right down to the Gulf of Mexico. It will then winter somewhere between central Mexico and Panama.

I just can’t get my head around the fact that such tiny creatures can travel such long distances and survive. I know a lot of them don’t but they can’t say, “Ooo it didn’t go so well last year. Lots of my friends didn’t make it. I think I will just stay here and give it a miss this year.” I wonder if this year they will see the difference and say, “Wow, look at that I can actually see where I am going, no pollution!”

That is my hope for them anyway.

All the best,
Rose

Printed from https://gatewayretreatbelize.org — Letter from Belize no. 87.