Letter from Belize no. 90

The site of Gateway Retreat is truly remarkable. I would like to take you on a tour of it. I mention parts of the gardens from time to time but I hope to show you the overall layout, how each section connects and give you a bit of background into how it has all evolved in an organic way.

Any of you who have created a garden from scratch will know what a rewarding experience it is. Many of the new builds in Belize start with plots that have been completely cleared and in addition have often had a layer of white marl or limestone laid on them so one is working with a completely blank and infertile canvas with not a plant or tree in sight. In our case though there was forest which we wanted to work with rather than strip out. 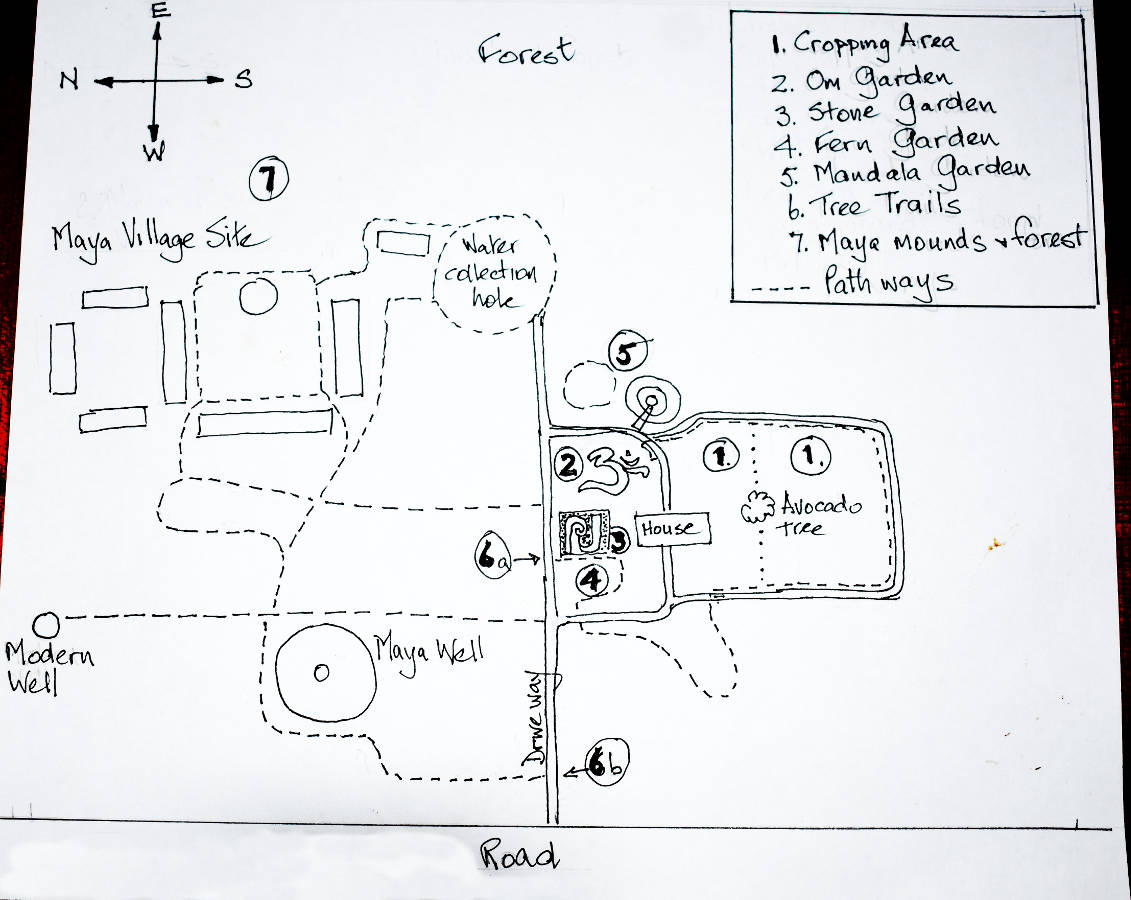 The whole site is 30 acres, approximately 200 yards x 600 yards. This sketch plan is not to scale. It shows the lower section of the property. The cleared area for the dwelling and gardens covers approximately 2 acres and the Maya mounds take up about a further 3 acres. The remainder to the east is all dense forest. 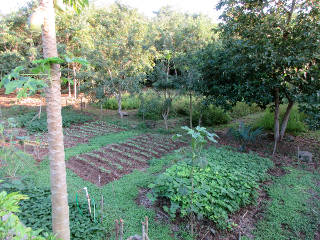 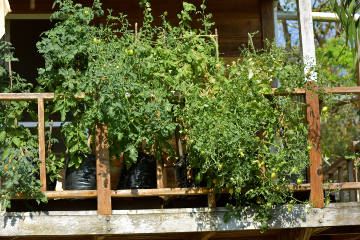 Henry’s first job once the house was erected was to create a food garden and he was really able to put his years of giving advice in sustainable agriculture to good use. The soil was very depleted from continuous cropping of cane, overuse of herbicides and fertilizer and it has taken 10 years to build up that soil into a fertile condition. The cropping area is divided into 2 parts. The part to the immediate south of the house has beds in it which have a strict rotation programme of beans, cassava and sweet potatoes. Cassava is in the mix as Henry discovered that root-knot nematode, a microscopic worm that attacks the roots of crops, is endemic in the soil here and that cassava combats this. 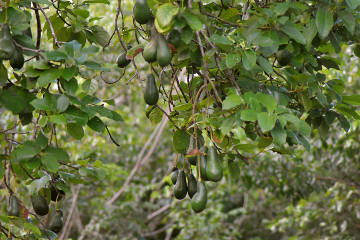 On the south side of this garden and divided by avocado and plantain trees there is another section which has been prepared and the soil improved for whenever more people join the Retreat. For several years a leguminous bush, which Henry came across growing elsewhere on the property, was grown there providing essential nitrogen to the soil.

The ground was incredibly rocky and the rocks dug out and removed were enough to build a road around the whole perimeter of the cropping area. This punishing work was all done by hand.

It has been interesting to learn what grows and what doesn’t, what can cope with the extreme heat and what can’t. Some things flourish for several years and then vanish completely. When I first arrived cilantro (coriander) grew like a weed. I just had to step anywhere outside and gather a bunch. For the last few years – nada, not a thing. Henry has had huge success with growing certain things like tomatoes and sweet peppers in grow bags on the veranda where they get morning light and evening shade, where the soil does not get too hot and where they are protected from birds and other creatures. 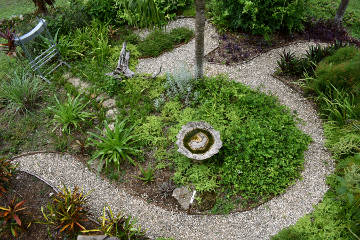 When I first arrived almost 2 years after Henry I undertook to develop as an ornamental garden the area immediately in front of the house. It is quite a large space and I realized it was going to be too big to fill entirely with plants which would likely need a lot of attention. I decided to break it up somehow and came up with the idea of making a pathway in the form of the Om sign and it has worked beautifully, creating curving shapes and spaces, a very feminine contrast to the masculine rectangles forming the veggie garden. It is ever changing with each year as we find new plants to give more colour by way of giving a contrast to the very green forest backdrop. I find that most flowers wither quickly and I now look more for leaf variations to provide the colour.

By this time I was beginning to realize that creating different and separate areas was going to be the way to deal with such a large space and it has gradually evolved into a series of interconnected smallish gardens. 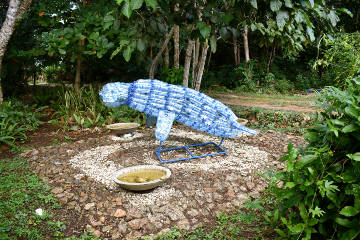 In a small area on the west side of the house I found a spot where nothing much would grow. The gardener who helped us at the time remarked how the stones “grew” after a rainfall, noticing how the run off of any soil did indeed expose the rocks and stones and make them look as if they had grown. This gave me the idea of “growing” a stone garden which our daughter Jess built on one of her early visits. It has become a lovely place to put our concrete birdbaths and give a home to the manatee sculpture. It does have a lot of weeds popping up though as well as fallen leaves and twigs and is difficult to maintain in its pristine condition. 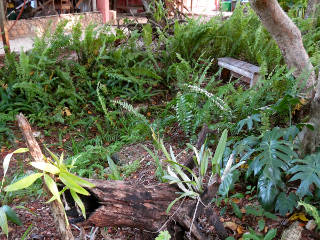 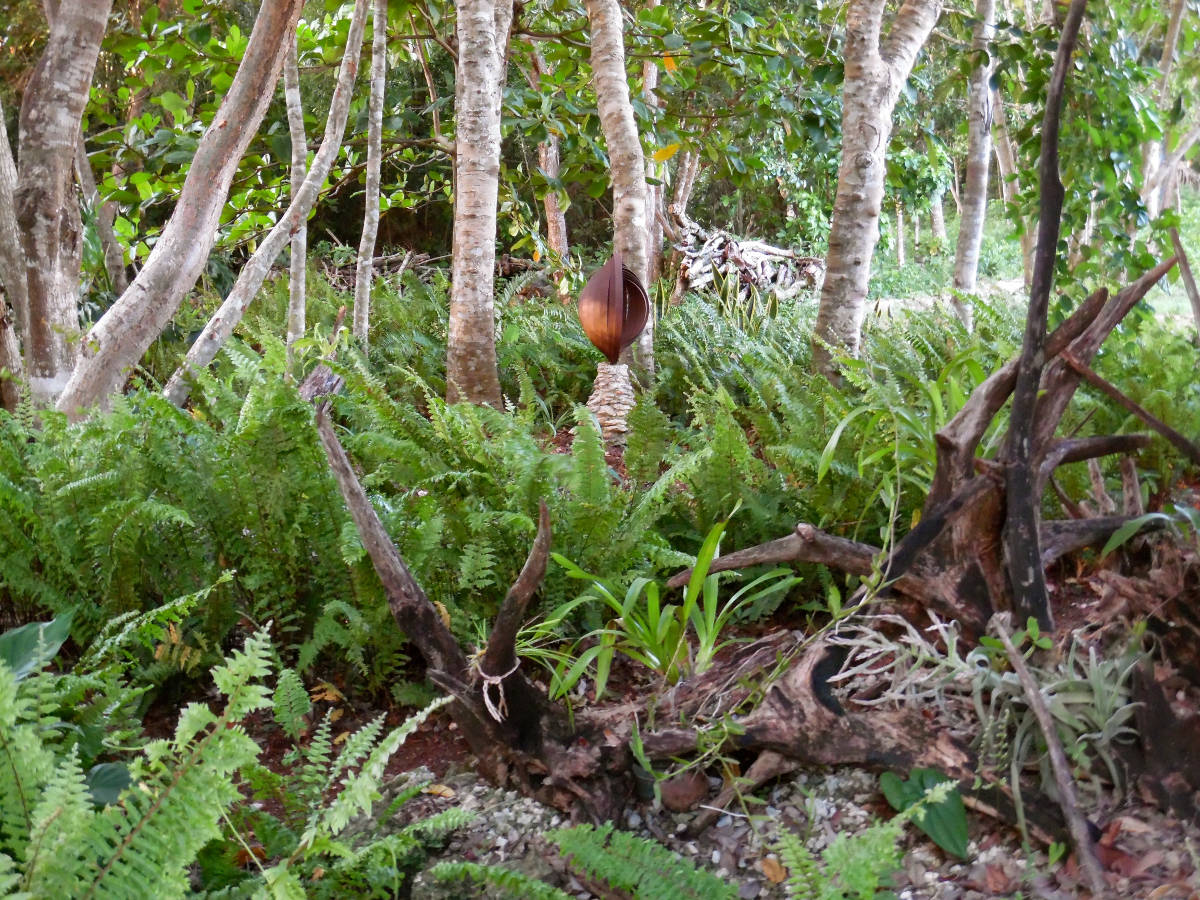 About that same time I was given a huge pile of ferns by a friend who was having a clear out. That is the beauty here; you really don’t have to buy much in the way of new plants unless you choose to. Once plants are established they grow prolifically and always need thinning out and it is great exchanging plants with other people. Anyway, where to put the ferns I wondered. Behind the house there is a group of trees providing lots of shade. I planted the initial ferns there and then over time the more I looked the more I could see that it could be developed into a bigger area and so I created pathways through the trees. We even thought of having a pond there to catch overflow from the water storage tanks but in the end decided that it was not going to be viable because of whining mosquitoes and chortling frogs and we filled the hole with a variety of shade loving plants. 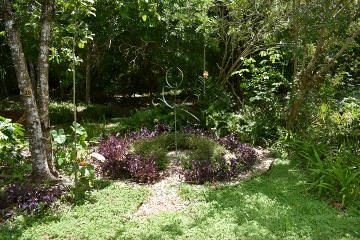 Looking lush after the rains

Then after some years Henry remarked that it would be nice to do something with an undeveloped area to the front of the house, beyond the Om garden, on the other side of the driveway and adjacent to the veggie garden. Faced once more with the challenge of filling up a pretty large area I had to put my thinking cap on again and came up with the idea of creating a mandala shape which also provided a perfect spot for a new sculpture. It has taken a few years to get well established and during the drought last year and the first half of this year it was looking rather bleak but it has come back beautifully and is looking lovely and lush again. 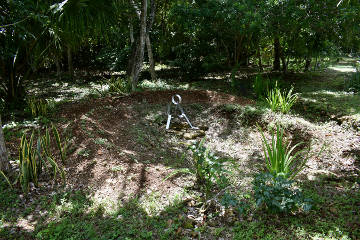 Just beyond it we dug another hole to provide a space for run off water should we have excessive rains. Ironically that was just before the 2 years of very poor rainfall. I was not sure what to plant in it but wanted to prevent the sides from washing away so I planted a variety of things to see what would grow well. I have very recently pulled a whole lot out as it had got very tangled and have settled on 2 ground covers which we are encouraging to grow there and then it will be kept fairly close cut with the strimmer so as not to lose the design structure. 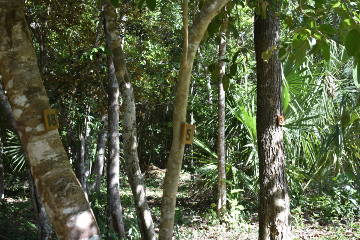 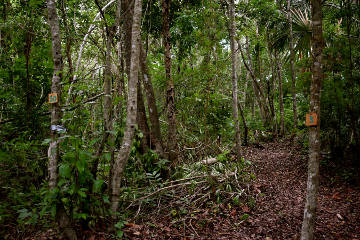 The blue trail, the original trail around the house and the green trail, the new one leading to the Maya mounds. The numbers relate to a list giving Latin, English, Spanish and Maya names.

One is really struck here by the huge diversity of plants, vines, shrubs, and trees: so much in a relatively small area. I had often thought it would be nice to know more about the trees and set off a few years ago to try and identify and label some of them. My early ambition was to create a trail through the whole 30 acres but got completely overwhelmed after seeing how impenetrable the forest is in parts and then was completely put off when we came across a huge rattlesnake in our path. We finally settled for the much more manageable area right around the house. Drawing on the knowledge of our gardener and a friend we managed to identify a good number of trees and then further help came in the form of Henry Martinez, a visiting botanist from Switzerland. He has been able to confirm the names of the trees and continues to volunteer his help as we develop a new trail. 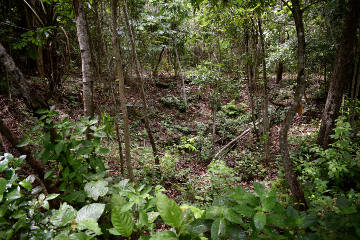 It is no simple job identifying the trees. Everyone you speak to knows them by different names and one has to be fastidious to ensure accurate identification. We had the idea that inviting the public to view the trees and the Maya village site on the property would be a good way of generating some income and we have created a new tree trail away from the house leading into the forest and the Maya mounds. We have now identified and labeled almost 40 species. Of course opening this to the public is on hold for now under Covid restrictions.

The new tree trail leads to the Maya Mounds which is a very special and sacred place and it is a privilege to be custodians of it. I walk there every day in the cooler weather, this time of year less so as I find the mosquitoes too hostile but every time I go in there I come away in awe. 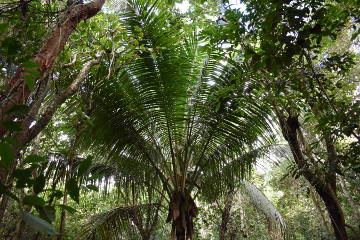 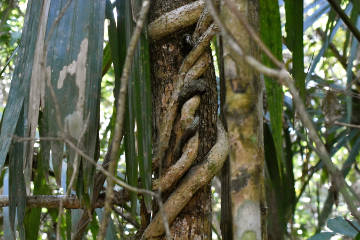 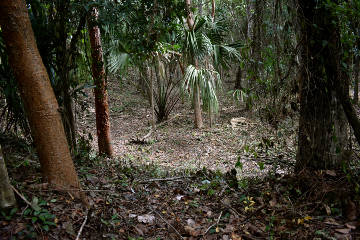 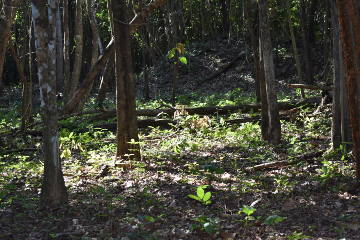 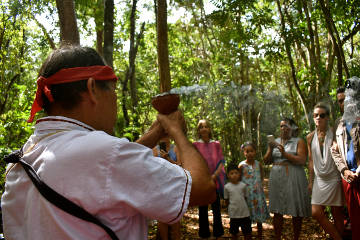 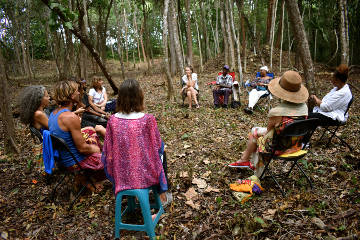 So you can see we have a wonderful botanical garden here which we very much hope to share with more people in the future.

Our love to all and the prayer that you may find something to enrich you during this quieter more reflective time in our lives.
Rose

Printed from https://gatewayretreatbelize.org — Letter from Belize no. 90.